Tunes of the day:

What differentiates Michael from the other teachers, is that he has handouts 😉

(Methinks I didn’t take any pictures during Vlado’s workshops because I was having too much fun!)

After the days’ sessions, we’re always rather hungry. Tonight, the Smith College cafeteria people graciously offer dinner outdoors. The weather is splendid, and we’ve got full-on buffet options on the menu. These people are so terrific that even our instruments are invited for dinner, as this picture will attest:

Straight from the banquet to church! To Helen Hills Hills Chapel (yes, two Hills for Helen) for the first Django In June Concert. Featured tonight is the StÃ©phane Wrembel Trio, with special guest Biel Ballester Biel Ballester from Barcelona.

For the unitiated, StÃ©phane is a rising star of the US Gypsy Jazz scene… and beyond. That said, it’s a little difficult to describe what StÃ©phane does, as he’s not a traditionalist in any sense of the word. For the sake of brevity, I’ll characterize his music – if I can avoid being punched by StÃ©phane – as Gadjo Grunge.

Fox News, I own a copyright on that term…

For reference, I’ve adding a clip of the StÃ©phane Wrembel Trio’s performance LAST YEAR at Django In June 2006. As soon as someone spots an embeddable video excerpt of this year’s performance, please let me know, and I’ll replace this clip with the new one. 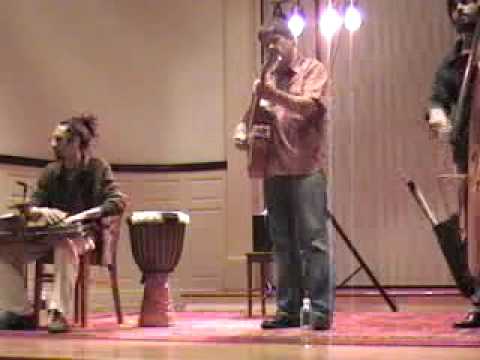 For the main set, the Trio was joined by the amazing Biel Ballester from Barcelona. Biel, who accepted the Django In June gig with only one week head time was quite the melodic and brooding counterpoint to StÃ©phane’s stratospheric sonic stretching.

After the storm, you have… further breakneck tempo jam experiments! Back at Franklin King House, it’s Sweet Georgia Brown looped for 632 choruses at 230 BPM until 2am, for God’s sake… Even a hostile lawn sprinkler system couldn’t stop these guys.